Ever since middle school, I have been passionate about theatre. I saw a production of Macbeth at the Oregon Shakespeare Festival in seventh grade, and from the moment the show began, something clicked in my head: I wanted to be an actor. I live for the moments when I get to be on stage, acting. While some people relieve stress by going to the gym, or eating chocolate, I find my release by pretending to be other people. In high school, my go-to line was usually, “I can’t, I have rehearsal” (and nine times out of ten, it wasn’t a lie). Theatre is a life-consuming thing, and I wouldn’t have it any other way.

This semester at Queen Mary, I am enrolled in a course called “London, Performance, Now.” Through this course, I’ve been able to have some fantastic discussions surrounding all that theatre has to offer, as well as explore many different theatrical opportunities in London. Much to nobody in my family’s surprise, this is my favorite module (not just because of all the shows we get to see, I promise). I have loved being able to see so much theatre in the short time I’ve been in London. A large part of my decision to study at QM was because their drama department is one of the country’s leading centers for the study of drama. It’s a pretty wonderful feeling to engage with like-minded people who share a passion for drama (because theatre people are the best kind of people). As a theatre enthusiast, studying abroad in London is a wonderful experience. Everywhere in London there are shows to be seen. Yes, there’s the famous West-End, and The Globe, but there are also hundreds of theatres scattered about the city that put on equally stunning works of theatre. If you love theatre, London is the place to be.

Whenever I tell people that I’m majoring in human biology, and minoring in theatre, I often get remarks about how interesting a combination that is. My general response is an awkward shrug of the shoulders, especially as I’m often confronted after with the dreaded question of, “but what do you want to do in the future”? (Seriously, please stop asking 20 year olds this question- I don’t even know what I want for dinner half the time). Usually, I mumble something along the lines of uncertainty, but now, I know where I want my life to take me. If ever there was a time for a revelation, I suppose being halfway across the world is a good place for it to happen.

At home, in the US, I frequently feel so judged whenever I tell anyone that I want to act. People deem it an economically “unreliable” job, and so therefore, I must be out of my mind to pursue such a career. The media and magazines constantly label acting as a “useless” major. It’s as if I have to apologize for my passion, for the part of my life that makes me truly happy. The thing is, no one wants to be stuck in a job that they don’t like… so why not pursue what makes you happy? It feels different here in London. I’m not so blind as to think that everyone embraces acting as a “true” profession here, but I know that the art of theatre is more looked after, and more admired here than it is in the States. To me, that’s more inspiring and uplifting than anything.

On October 12, I was lucky enough to see the new play: Harry Potter and the Cursed Child (believe me, I still have to pinch myself that this happened). I wanted to see it because I’m a true Potter fan, and I’m all for basically anything that’s a live piece of theatre. Let me tell you this, I cannot do this play justice on paper, but I will say that I have never loved a production so much. Whatever I was expecting when I walked into the theatre was blown away the second the show began. As an audience member, I completely forgot about the world around me. As an actor, I felt massively inspired. I’ve been enamored with several productions, but never have I had such a visceral response to a play. When the lights came up after part two, so did the lights in my head: I want to be on stage, and I want to make people happy through theatre. That’s it. Simple as that. 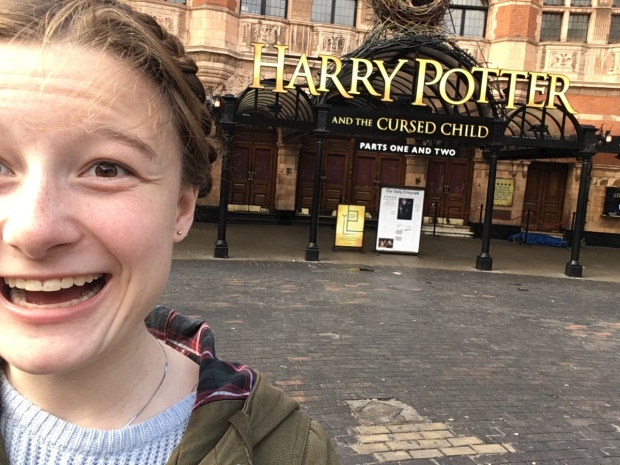 Obviously, this decision is not the kind to be taken lightly, and I am not so juvenile as to think that now everything will be perfectly easy. The future is still a terrifying prospect, but I feel like I need to follow my gut with this one. It’s been over a month since I saw the show, and my thoughts haven’t changed. I’d like to believe that because I can’t stop thinking about it, that I’m making the right choice for myself. I am so thankful for theatre, because without fail, every show reminds me why theatre is so important, and why I want to keep doing it for the rest of my life. I guess I just needed a little shove from a new direction, and for that, I am immensely grateful to London, and the cast of Cursed Child. Ultimately, before my time in London began, I would have contented myself with saying that theatre could remain a passion of mine (as a hobby) for the rest of my life. After engaging with the theatre in London, I don’t think that that would be enough for me anymore.