As I near the end of my year in London, I thought I would write up some of the things that make London (and the UK) so quintessentially British… Obviously, I’m not the expert, and these are just my experiences, but don’t get me wrong, I love London and everything about it. However, please, feel free to add some!

To this day, I still have a moment where I don’t know how to respond when asked this question. Especially because it’s usually asked in passing and before you can even say anything, the person is gone! I’m still not sure if there’s actually an answer to this question so I just roll with it… It took me a while to grasp that this was just sort of the British way of asking, “how’re you doing?” as opposed to genuine concern about my health and well being (9 times out of 10, I still think that I must look a bit off or something if I get asked this).

If there’s one thing the British have mastered, it is queuing. Without fail, wherever you go, there will be a perfectly formed queue, where everyone (seemingly) complains very little. It’s as if it were second nature to form a straight line of people but even boarding buses, there are queues. I’m so used to mass clumps of humans wherever I go so, to be honest, I like the orderly system, and I wish everyone would adopt it.

Now, this one may just be coming from an American, but after all the months I’ve been here, I’m still having issues sorting out which coin is which denomination. The 50p coin is bigger than everything, and the 10p is round, but the 20p isn’t… I would also like an explanation as to why some of the coins are not round (genuinely want an answer to this, please)…

We’re all familiar with Ron Weasley’s favorite phrase of “bloody hell,” but surprisingly, there’s a lot more where that came from over here. In the US, coarse language seems more shocking and rare than it seems in the UK. Not only are Americans less creative swearers, but also we tend to use it less in relation to banter, and more to actually exclaiming frustration or distress. I would say my vocabulary has expanded since coming across the pond, but hey, you learn something new every day.

Obviously this isn’t the case for everyone who uses a cell phone, but a lot of my friends end a fair amount of their text messages with a nice, little “x”. Obviously, we weren’t playing a game of tic-tac-toe, but it still threw me for a bit of a loop at first. However, I’ve gladly occasionally adopted the habit, and it’s always nice to receive a tiny bundle of love through text message! I want it to become a worldwide thing. Please, and thank you Xx

This is not to say AT ALL that you feel ignored when arriving in London. What I mean by this is that people aren’t as open as they are in the US. When I’m at home, it’s common practice for me to smile at a stranger while passing them in the street, or potentially strike up a conversation with someone while in line for something. However, here, I’ve gotten some weird looks from trying to smile at someone walking by (sometimes people smile back though-don’t be deterred!). Being a shy person myself, I tend to fit in with the withdrawn attitude towards others, but I’m glad to report that everyone is very kind when you start talking to them!

Something you hear every time the tube stops and you’d think it would be annoying by now, but no underground service sounds as dignified in America, so I’m going along for the ride. Additionally, I have to drive everywhere when I’m at home, so being able to sit back (or stand) for a commute is (for the most part) rather enjoyable because I can zone out and time passes quickly. The tube voice is pretty much my best friend when I’m coming home late and it announces, “the next station is Mile End”… 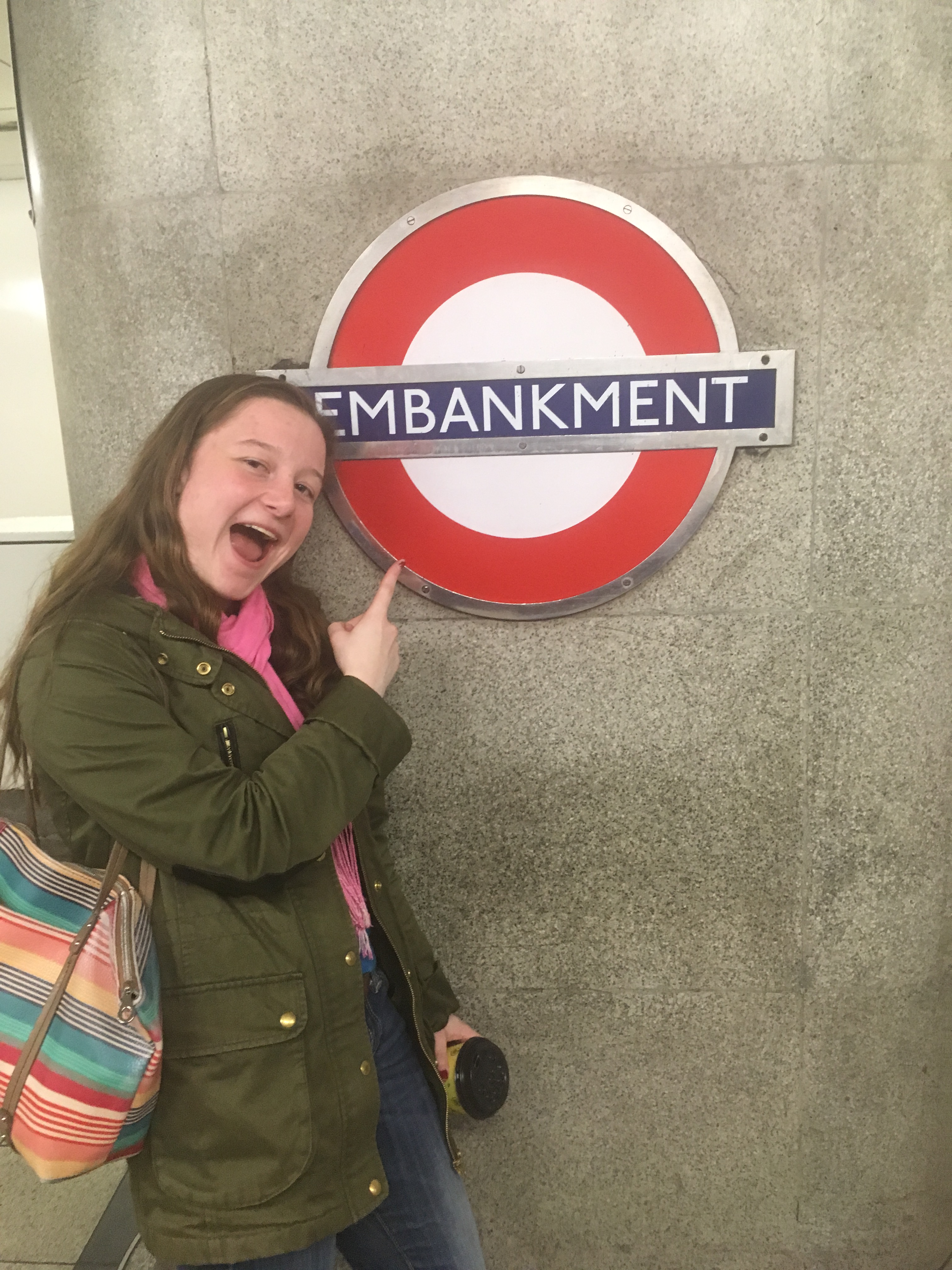 No, I don’t mean double tapping on Instagram. I’m talking about faucets. Not all the sinks have them, but a lot of them have two taps: one for hot, and one for cold. On general principle, not too bad, but when you have to choose between scalding hot water and freezing water, not the best. You end up splashing water across the sink like a child in an attempt to have water at room temperature (or a temperature your hands can tolerate for more than two seconds). 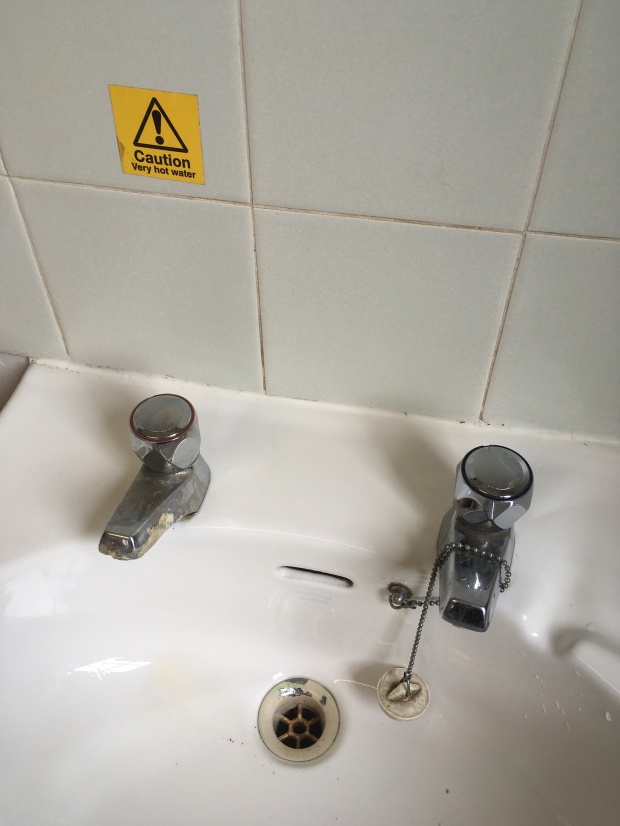 I think the British have the best sense of humor and since coming to London; I have gained the useful tool of banter (or at least, I’m trying to gain it). Nobody does dry or self-deprecating humor like the Brits, and yet, it works! I’m not going to lie; my sarcasm has gone up exponentially I am always up for getting roped into a battle of wits. Do it for the bantz, mate, do it for the bantz.

I’m pretty sure that a lot of the doors out of buildings in this country have these. It’s a simple concept: you have to press an “exit button” in order for the door to open, but something that seems almost out of place if you then have to pull on the handle anyway. I was convinced I was locked into my flat building for a couple minutes when I first got here because I couldn’t get the door to open.

The whole “American English” versus “English English” is real. It’s not incomprehensible or anything, but those little differences can throw you off balance sometimes. Granted, some of the ways the English refer to things can be adopted by an American (i.e. bins, lift or queue), but sometimes it just sounds silly (i.e. plasters). I get a kick out of the fact that the British say “touch wood,” while we say “knock on wood.” I don’t know why, but I like it. The other day, I said the word “herb” to someone and had to repeat myself so many times because I don’t pronounce the h sound. Once I did though, I was understood- go figure! (We’ll just pretend I didn’t sound absurd pronouncing that h in my American accent).

Every socket in my flat can be turned on and off, which is not only great for the environment, but means you don’t have to necessarily unplug everything when you leave… you can just switch it off!

I definitely have at least one, if not three cups of tea a day. I’ve yet to go to a proper afternoon tea, but it’s on my list of things to do before I hop on the plane back to the states. That being said, I am OBSESSED with scones, jam, and clotted cream. I’m trying to figure out how to smuggle them all back with me because clotted cream doesn’t exist back in the US, and I don’t know how I’m going to live without it.

Back at home, you’d only say this when giving a toast but here, it can be used as a thank you, hello, or goodbye. Again, I dig it… it’s pretty cheerful, if I do say so myself (I know, I’m very punny, thank you)

I would be TERRIBLY remiss if I didn’t at least mention this somewhere in the list. Not only are most British accents remarkably attractive, but also I could honestly just listen to them for hours… I want a calm British accent to remind me it’ll all be okay every day.

What a very British scene. The Pub. Have any of you been enjoying the easing of restrictions by enjoying a pint or some fizzy pop in one of our many beautiful outdoor beer gardens this spring? 🍻
Have any of you seen the railway arch mural in London Bridge? 💓
Mondays on campus 💙
Meet Emily, Vice President and Welfare Representative for @esn_qmul and final year History student. New blogpost up (link in bio) looking at her amazing year abroad in Amsterdam! ✈️🥞🚲🧀🧡 #qmulgo #esn #erasmus #yearabroad #studyabroad #amsterdam
Greenwich looking as beaut as ever 💚 #qmulgo #london #greenwich #greenwichpark
For an escape from the city, head Eastbound on the Central Line to Theydon Bois and enjoy a beautiful walk through Epping Forest - if you’re lucky, you might even spot the forest’s deer! 🌳🌲🦌